The human brain is often referred to as the body’s “command center” – it’s active at all times and responsible for our thoughts, feelings, and actions. It is the central organ of the human nervous system and contains about 86 billion nerve cells (neurons).[1] There’s a lot that scientists still don’t know about the brain and how it works, but many large-scale national and international projects have launched in recent years dedicated to understanding the brain. Even so, the brain is so complex that this research will continue for decades to come. 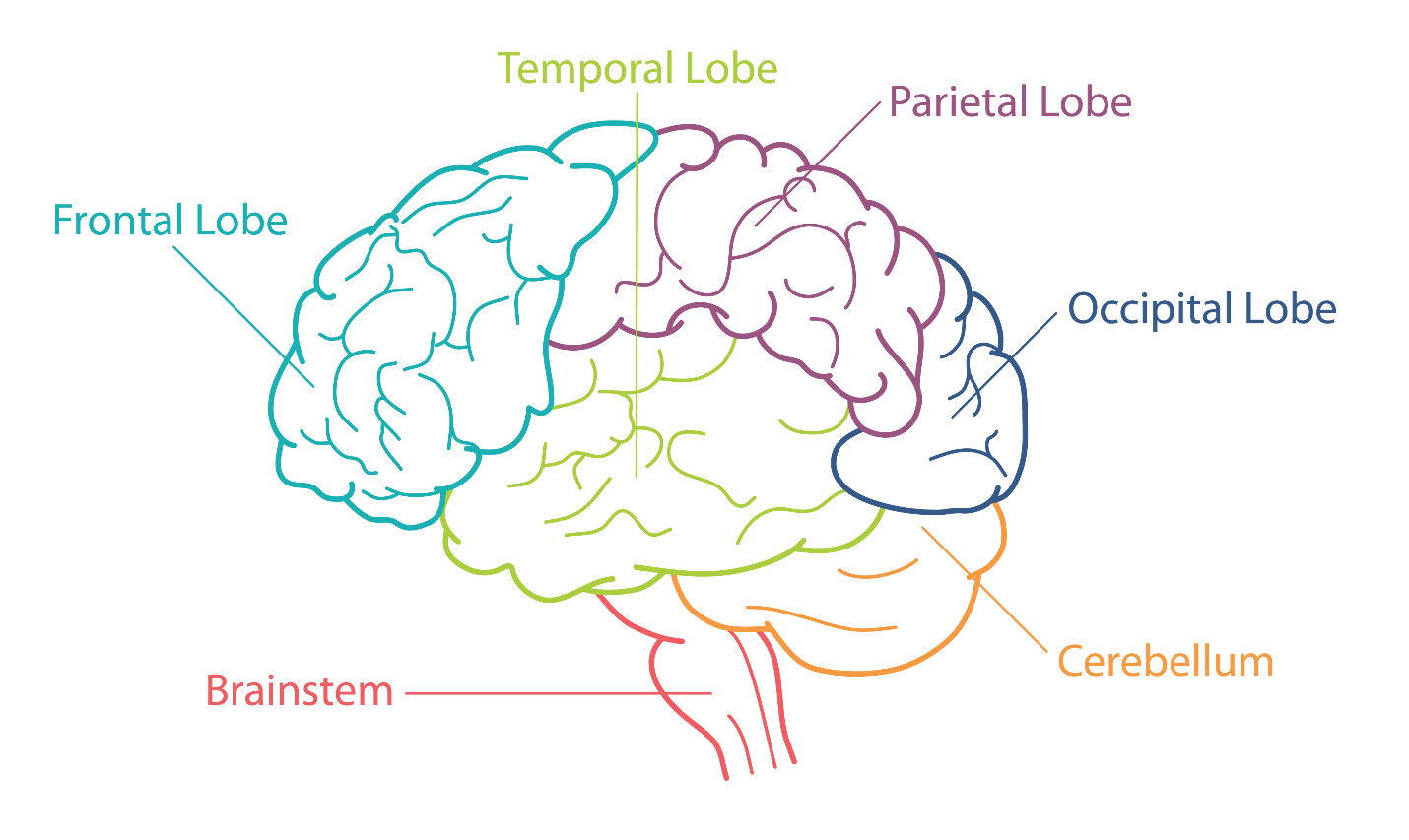 When most people imagine a human brain, they’re picturing the cerebrum. It makes up nearly 85% of the brain and is where most of the important brain functions happen. The cerebrum is split into two hemispheres (left and right), and each hemisphere has four lobes:

The frontal lobe is the largest of the lobes and the most complex part of the brain. It controls executive functions, a set of cognitive processes that are necessary to manage behavior and meet goals (like time management, organizational skills, and the ability to switch focus). The frontal lobe also plays a role in reasoning, decision-making, planning, and emotion regulation.[2]

The parietal lobe is responsible for sensory processing and perceiving stimuli like pressure, temperature, and pain.[3]

The temporal lobe is responsible for processing and interpreting sound (including language) and plays a role in forming and retrieving memories.[4]

The occipital lobe is mainly responsible for processing visual information.[5]

The cerebrum is covered by a layer of tissue called the cerebral cortex, which is the outermost layer of the brain and where most of the actual information processing in the brain takes place. This tissue is about 2.5 millimeters thick and is made up of gray matter (nerve-cell bodies and nerve fibers). The surface of the brain appears wrinkly because the cortex has folds and grooves to maximize surface area relative to brain volume.[6] 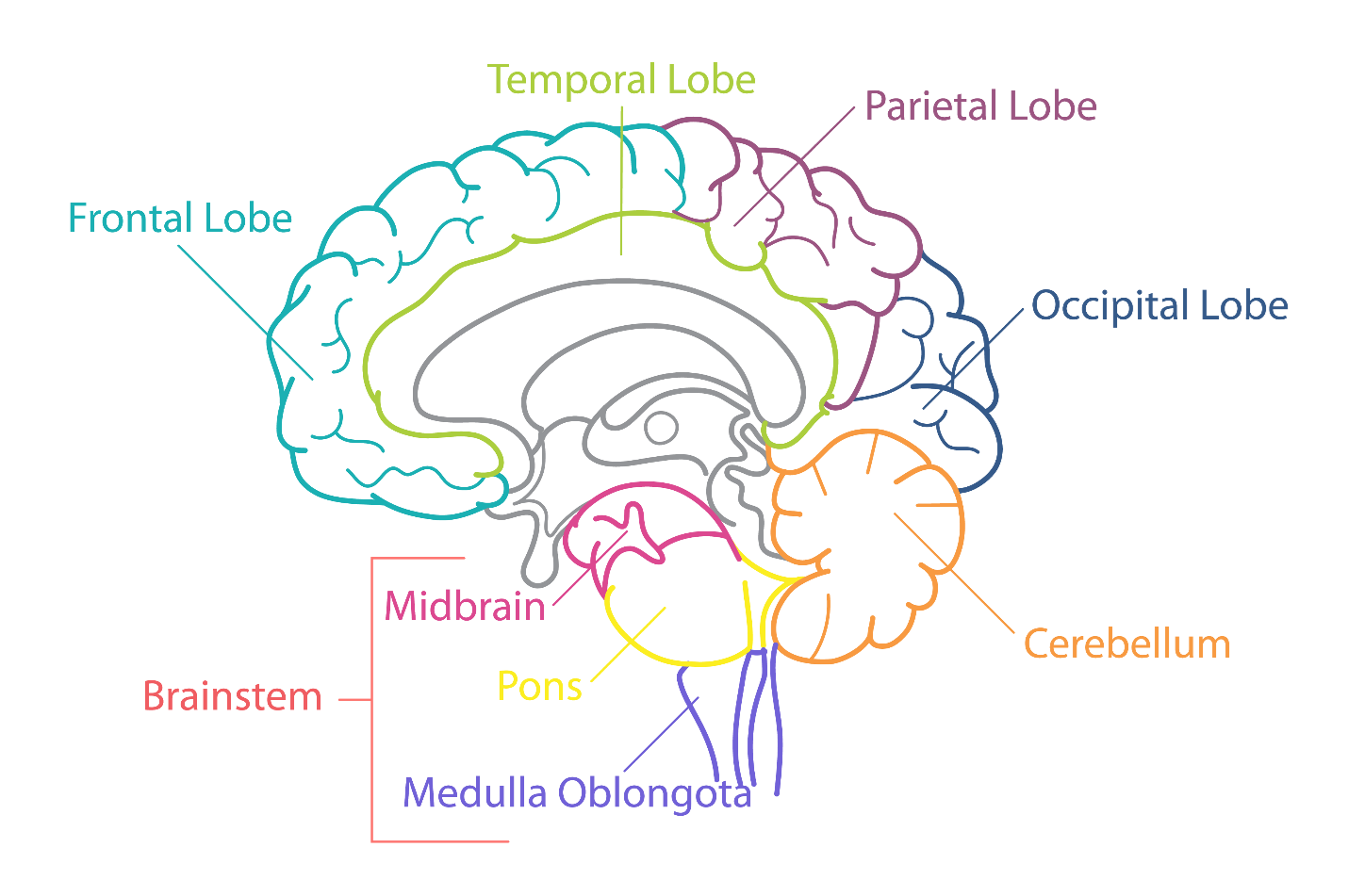 The brainstem is at the base of the brain and connects the cerebrum and the spinal cord. It includes three parts: the midbrain, the medulla oblongata, and the pons.

The midbrain is a highly complex structure with many neuron clusters, pathways, and other structures. It is primarily involved in motor functions (particularly eye movement) and audio and visual processing.[7]

The medulla oblongata, or the medulla, is at the bottom of the brainstem, where the brain and spinal cord meet. It is crucial for the most basic survival functions like heart rate, breathing, blood flow, and oxygen levels.[8]

The pons is the connector between the midbrain and the medulla oblongata. It is where four of the 12 cranial nerves originate, enabling a wide range of activities, including tear production, chewing, blinking, balance, and facial expressions.[9]

The cerebellum is about the size of a fist and located at the back of the head, behind the brainstem. It has many functions relating to movement and coordination, like maintaining balance and posture, timing muscle action, and learning movements that require practice (like playing an instrument). Researchers believe it also has a role in thinking, including emotions and social behavior.[10]

[6] American Association of Neurological Surgeons. (2021). Anatomy of the brain. https://www.aans.org/en/Patients/Neurosurgical-Conditions-and-Treatments/Anatomy-of-the-Brain