When you or someone close to you starts to experience the early warning signs of mental illness, knowing what the risk factors and symptoms are will help to catch them early.

Often times, family and friends are the first to support a person through these early stages. Like other health conditions, we need to address the symptoms early, identify the underlying illness, and plan an appropriate course of action on a path towards overall health. 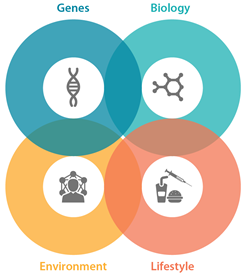 17-28% of risk for mental illnesses can be accounted for by variations in common genes.

Much stronger links were found in twin and family studies. Estimates for total heritability, or how much a disease is tied to genetics, are(1):

In one study, head injury between the ages of 11-15 was the strongest predictor for development of schizophrenia, depression, and bipolar disorder.(2)

Brain changes like building a “tolerance” or reward response to stress, or abnormalities in the prefrontal and frontal cortex, and irregularities in the function of the neurotransmitter glutamate are also risk factors for mental illness and substance use.(4)

People who are exposed to adverse childhood events including abuse, neglect, divorce, witnessing domestic violence and having parents who have substance use issues, mental illnesses or are in jail are(3):

People with any mental illness are(5):

Having a combination of symptoms (not just one symptom) indicates that someone might be showing signs of a mental health condition. Be aware of these symptoms when they last longer than a few weeks and start to affect school, work, relationships, or your everyday activities:

Problems with concentration, memory, or ability to think clearly

Changes in eating such as loss of appetite or overeating

Not being able to complete school or work tasks

Loss of interest in activities that are normally enjoyable, withdrawal from others, or disconnection

Feeling like your brain is playing tricks on you. Hearing knocking, scratching sounds, voices, or your name being called. Seeing things that other people do not see, like shadows, changes in light, figures.

Changes in energy level and sleep patterns. Often someone will sleep during the day and be up at night.